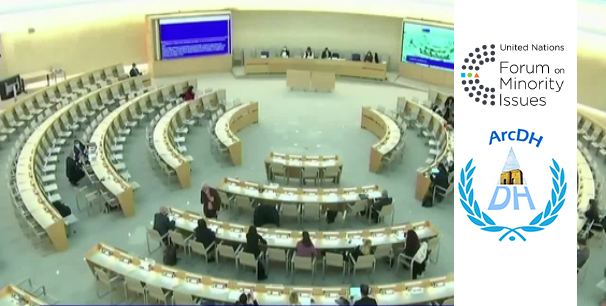 Subject: Conflict prevention through protection of human rights of minorities

The UN Forum on Minority Issues – the main annual event of the UN System focused on minorities – discussed on 2 and 3 December one of the world’s greatest challenges – tackling more effectively the growing number of violent conflicts.

The Forum, involving over 650 delegates, had be guided by the Special Rapporteur on minority issues, Fernand de Varennes, and chaired by Victoria Donda, president of the National Institute Against Discrimination, Xenophobia and Racism, one of the Argentine Government’s main human rights institutions.

Among participants joining the Forum were be officials from governments, the UN, intergovernmental, national and regional organisations, civil society and minority representatives from different parts of the world.

The hybrid-style Forum held in Geneva and was livestreamed at media.un.org

At this meeting, a three-member of Azerbaijan Human Rights Association; ArcDH also participated and presented four topics. Two members of the Arc speak at the forum- watch the videos of ArcDH if you like: