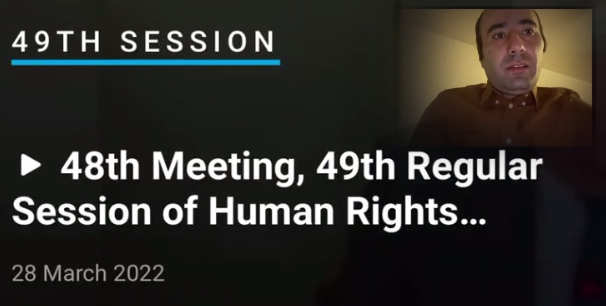 Item 8: General debate on the follow-up to and implementation of the Vienna Declaration and Programme of Action

Life is tough for almost all minorities in Iran but let us consider its some eight minority nations forming two-thirds of the total population, where the government denies their identity. The government even manipulates their historical identity and gives them invented names.

The resources are allocated disproportionately to central provinces, but the minority nations are deprived under a variety of contexts, who are made to be vulnerable and exposed to risks. They have no protection and are in dire need of protection. The Vienna Declaration fills the gap, which rejects cherry-picking of the human rights and conventions, normally practiced by Iranian authorities.

Now the country is infested with racism and xenophobia, as minority nations become internally displaced people and migrant workers, these persons suffer from an intolerance of the host central provinces; the rights of the woman and the child belonging to minority nations have become much more complex; child marriages serve as a way of getting out of poverty and is getting out-of-hand. The activists of the nation of Azerbaijan are even imprisoned for celebrating the International Mother Language Day and the right to education in Azerbaijani Turkish is denied for the last 43 years.