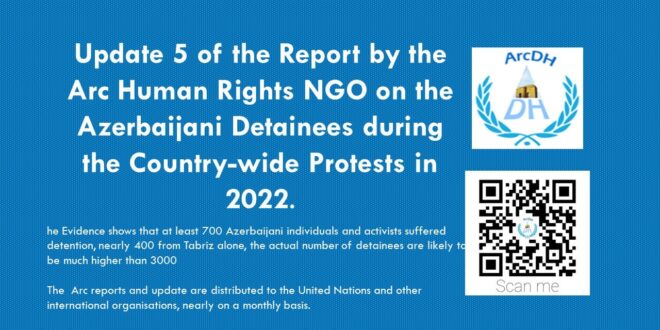 A Report by ArcDH: Anti-State Country-wide Mass Protests and Their Outrageous Prosecution by the Islamic Republic of Iran

The Arc Association for the Defence of Human Rights of Azerbaijanis in Iran just presented its Update 5 to its report on 19, related to the protests, which has taken off since mid-September 2022 . The Association streams its reportage of the detainees on near real-time basis and reports them to the United Nations and other international organisations nearly on a monthly basis.

The number of arbitrary acts of detention of Azerbaijani victims is escalating. Arc Association reports primarily the individuals confirmed by a family member, often in social media. Notwithstanding this, we acknowledge that the number of Azerbaijani victims are far more than that reported. Our best estimates are that the number of the victims in Azerbaijani provinces are more than 3,000 but our rough estimates are even larger. These victims are normally arrested by violent security agents and operatives of the Iranian Ministry of Intelligences, who keep them in their heinous detention centres.

The overview of the Azerbaijan victims, be it individuals or activists, are summarised as follows:

The Arc Association reported the confirmed names and some details of up to 700 Azerbaijani victims, of which nearly 400 are from Tabriz. These victims are subjected to torture and are deprived of all of their rights. Some of these individuals are abused sexually, but unfortunately, we are not at liberty to disclose such details.

Our last report in English is 45 pages, and you can download it from the link below: